If you spend much time reading through our Blog Posts, Image Galleries, or any of our other Social Media accounts, you will probably pick up on a particular recurring theme that streams through much of it, which is our affinity toward waterfalls! We love them. In fact, much of our travel planning strategy involves searching them out so when we started planning our trip to Island Park Idaho, just outside of Yellowstone, we were ecstatic to discover just how many waterfalls there were to see in this area! It turns out that, Yellowstone National park boasts a staggering 45 named waterfalls and cascades within its boundaries alone and there are many more that lie just beyond and outside the park as well easily making this location a Waterfall Chasers Dream come true!

On this visit, we had paired up with some friends of ours who had been to the park before but had yet to explore this trail and so, decided to take the short hike back to Fairy Falls, which would be our first waterfall adventure while visiting Yellowstone and for a first, it definitely did not disappoint!

To get to Fairy Falls Trail Head, for which there are actually two access points, one on either side of Grand Prismatic Springs.

We chose the Fairy Falls Parking lot as we had discovered that when coming from this direction, you end up passing by a small spur trail that takes you up to a scenic viewpoint that looks out over the Midway Geyser Basin and Grand Prismatic Springs. If you have not had a chance to check that out, then I would have to highly recommend adding that to your itinerary for the day as the view and picture opportunity up there is absolutely Stunning!

Hiking this trail was a very peaceful uplifting experience from start to finish! From the Fairy Falls Parking area you immediately make your way across the Firehole River via an old Iron Bridge and then proceed to follow alongside the river as you make your way behind the Midway Geyser Basin area and Grand Prismatic Springs.

The day that we hiked the trail, there were several large Bison making themselves at home along the river bank and gave us several great photo ops!

Another great feature was to see the Geyser Basin from this vantage point with its steam drifting up and into the shifting breeze lifting its surreal blue and orange hues from the mineral-rich waters. The scenery is absolutely magical!

After a short distance beyond the turn off for the Grand Prismatic Overlook and approximately 1 mi. from the Fairy Falls parking area is where the trail marker indicates making a turn and following the trail to the East. From that point, the trail meanders nearly effortlessly through a young Lodgepole Pine forest with glimpses of remnants still present from a historic fire that burned through the area during 1988. The distance from this point on back to the falls is an additional 1.6 mi. according to the trail marker there.

Though we did not see too many other hikers along the way, we did notice a large family with people of all ages including several small children and even a few strollers in tow just to give you an idea of how casual this hike is. The total elevation gain is 216 ft. Making it an easy option for just about anyone wanting to see this beautiful waterfall.

Upon arriving at the falls themselves, you are first greeted by the gradually increasing sound of water as it rushes over the rock edge and down to the pool below. There is something about that sound that just excites and invigorates my senses every single time! As you approach you are able to steal a few glimpses through the last few trees before stepping into a large open clearing that reveals this full unobstructed beauty of nature with its sheer white walls of granite towering some 200′ straight up. At the foot of the Falls is a small pool that fans out offering a place for visitors to dip their toes into the cool refreshing water and take a few moments to soak in the spirit awaking vibe that naturally cleanses your soul in places such as this!

DIY: How to replace an Accu-Slide Gearbox

A Mammoth Find at Yellowstone NP

A Mammoth Find at Yellowstone NP

A Good trip through the Badlands!

This site uses Akismet to reduce spam. Learn how your comment data is processed. 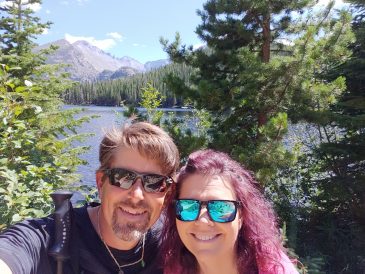 Craig & Nicole with their two faithful traveling companions "Zen" & "Gypsy" set out to find Love, Laughter and Adventure while striving to realize a lifestyle that is minimalistic, purposeful and meaningful while traveling the States in their Fifth-Wheel RV.

No images found!
Try some other hashtag or username

This website uses cookies to improve your experience. We'll assume you're ok with this, but you can opt-out if you wish. Accept Read More

We apologize, but our Storefront is currently being updated — no orders shall be fulfilled at this time. Please check back soon as we are working hard to re-open as soon as we are able. Dismiss